Brazil is not only known for their soccer team, but also for the Brazil beach volleyball teams who do very well in FIVB World Tours as well as games throughout the year leading up to tournaments.

The professional beach volleyball teams consist of two people only - either men or women, but not co-ed teams. It began as a family fun activity on the beach, but now professional teams come from around the world to play against each other in tournaments.

It's rumored that the first game of beach volleyball ever to be played was in Hawaii in the year 1915. The generally accepted time frame for the beginning of this sunny sport is the 1920s. A basic timeline as we know it is as follows: 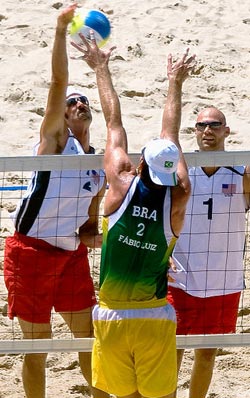 Crossing under the net to make contact with the ball is accepted as long as you don't interfere with the opposing team. The block is counted as the first contact in beach volleyball.

Team members need not rotate positions during the game. Beach volleyball rules state that you may not hit the ball with an open hand and the hand set rules are a bit stricter.

Indoor volleyball players have a larger court and harder ball. Their attire is typically shorts, jersey, socks, and shoes whether it is women or men playing. The rules for serving and coming into contact with the ball are slightly less strict than beach volleyball.

Some of the Brazil beach volleyball players who played in the 2010 FIVB World Tour included:

Great controversy has broken out on both sides regarding the attire, or lack of attire, that the women on the beach volleyball teams wear to play the sport.

The FIVB and USA Volleyball regulations simply state that a clean bathing suit or shirt and jersey must be worn on the beach court. The general assumption is that the women wear bikinis because they can move around more freely.

Some groups say the women are being exploited, but some of the women players pose for both men's and women's magazines on their own time wearing a bathing suit or sometimes much less.