Brazilian dance moves and song reflect the history of this amazingly diverse country. The choreography of the dances seen in Brazil each tells a unique story about the people of Brazil in years gone by.

Each dance style has its own flavor, rhythm, and dance moves.

Dance, like music, is very much a part of the Brazilian culture. It's rare to hear music in Brazil without seeing some sort of dance that goes along with the music. Music and dance are naturally associated with Brazil and the people who call Brazil home.

The term Afro Brazilian dance refers to the types of dance seen in the country of Brazil. Capoeira is referred to as an Afro-Brazilian form of dance as well as Samba. Afro-Brazilian styles of dance have become very popular in the last several years as a form of exercise. There are schools dedicated to teaching the moves and music associated with these forms of dance, which can be found around the world in addition to the country of Brazil. 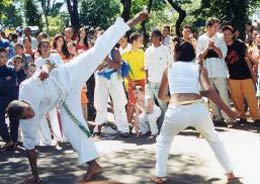 An explanation of Brazilian styles of dance would not be complete without mentioning Capoeira. Back during the days of slavery in Brazil, the slaves would fight amongst each other. When they were caught, the slave owners would punish both of the offenders, which the slaves thought was unfair to both sides, so they figured out how to cleverly mask the appearance of actual fights between themselves.

Instead of just all-out fistfights, they created capoeira, movements that looked like dance to the outsider, but in actuality was a real fight between two men. The rules: you may not use your hands, but may exact blows to the other person using your feet, heads, legs, and heels. Handstands and cartwheels were also incorporated into the fighting stances. The fights were even accompanied by music to make it seem more like dance! Today, not only Brazilians, but also people around the globe practice this form of Brazilian dance for exercise.

The Coco dance is thought to have originated in the Quilombo dos Palmares during the years of slavery in Brazil. When slaves had to break apart coconut shells, they would do so by forcefully knocking two coconuts together. A rhythm seemed to develop when many slaves were knocking coconuts together and out of that sound came the dance referred to as The Coco. The modern day Coco dance has replaced the sound of the coconuts knocking together with clapping. Both women and men in a circle perform the dance. 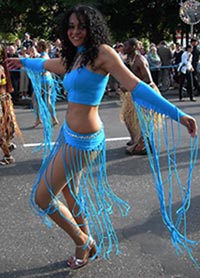 Samba dance is a significant element of Brazil's culture and is the dance most people think of when they hear the term Brazil and dance in the same sentence. When African slaves were brought to Brazil, they were forced by the government to practice Christianity and actively prevented from practicing their own religious customs.

Samba dance was the way African slaves found they could express and practice their own religion by throwing parties, with hopes that the Portuguese government wouldn't figure out what they were doing. But, once the police did figure out the slaves were practicing a religion other than Christianity, the parties were shut down. The slaves found another way to preserve the samba dance and rhythms!

Brazilians living in Northeast and Northern Brazil sometimes perform this dance around the holiday of Christmas. It's one of the most common dances performed in this area of the country, portraying the realities of the social classes during the colonization of Brazil. This dance is a bit different than some of the other styles of Brazilian dance because it has specific steps and an actual story line complete with a plot and drama. Adults and children can perform the Bumba-Meu-Boi.

The forro is a dance seen mostly in Northeastern Brazil. The music that accompanies this dance is created using a metal triangle, accordion, and zabumba. The origin of this Brazilian dance style has never actually been nailed down, but it has become quite popular with students of college and university age in other areas of Brazil such as the Southeast.

A man and a woman intimately woven together on the dance floor perform Forro. The three types of forro in Brazil include xote, arrasta-pe, and baiao. Each has its own rhythm and feel. The xote is the slowest rhythm of forro whereas the arrasta-pe is the fastest dance style of forro. Baiao is the original form of the dance.

Brazilian music and dance is throughout the country. The styles of music and dance vary greatly as you can see from the examples given above. The common theme across the various styles of Brazil's dances does seem to center around telling a story. Each dance has a historical background and tells a story of a group of people during a specific time in Brazil's history. It's interesting to note that musical dramas and forms of exercise have been born out of the original dances that came from the Portuguese, the African slaves, and others who influenced the culture of Brazil.

Brazilian dancing is, in addition to the music of Brazil, the heart and soul of who these people are and how they express themselves.