Brazil music runs the gamut when it comes to styles, instruments, and sound. It can be infectious, exciting, or soothing, depending on the type of music you're listening to.

The country of Brazil is a melting pot of diverse musical backgrounds and history. You'll hear music everywhere in Brazil - bars, restaurants, sporting events, beaches, homes, businesses, cafes, and mountains. It's part and parcel of Brazilian culture and lifestyle.

Brazilian music is filled with sounds of the history of the country. Brazil's history has been one of tragedy, poverty, slavery, and grief, and all of that comes out in the sounds and rhythms of their music.

The indigenous people, prior to the Portuguese settlers arriving in the country, played the first music of Brazil using rattles, flutes, drums, sticks, whistles, and horns. They used their feet to stomp out rhythm and their hands to clap and keep rhythm as well.

The indigenous people sang their songs both in chorus or as soloists. Two instruments from the early years of Brazil's musical history have survived into modern times - the ganza and the reco-reco. Both instruments are used to play the modern-day musical styles of samba and choro.

Portuguese explorers introduced the sounds of their music to the indigenous people of Brazil, which was a mixture of sounds culled from Portuguese history.

The musical elements from the Portuguese included influences from Europe, North Africa, India, Arabia, and the Middle East. Lullabies, dance music, and ballads were introduced to and melded with the folksy music of the indigenous music to create brand new and interesting musical styles.

African slaves were brought to Brazil for nearly 300 years before the country finally abolished slavery. Musical influences from Africa are heard throughout Brazil today as a result of the music brought with the African people.

Types and Styles of Brazil Music

Today, music of every kind is heard in Brazil. Some of it is strictly regional, but much of it can be heard in several regions of the country. 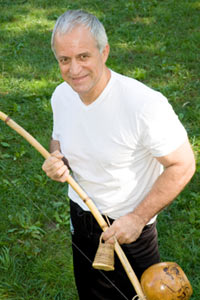 The lyrics in Brazilian music are words that speak to the history and culture of the people living in Brazil.

Lyrics associated with capoeira might speak to people longing for freedom, the fisherman who sails the sea finding food, the water of the sea and it's movements, or even as a warning to be respectful of a capoeirista.

Lyrics in forro music talk about romance and love and also of those times that jealousy, envy, and passion are in a relationship. Forro lyrics may even speak of a long ago love.

MPB, or Musica Popular Brasileira, is the name assigned to any and all Brazilian pop music. This type of music came out of a musical style called Tropicalia, a mix of samba and Bossa nova music styles. It's a unique combination of newer styles of pop music with the folk music sounds and style of the indigenous people of Brazil.

Drums and percussion instruments are often used in Brazilian music to create interesting rhythms or provide the background music for other instruments. Sambass is a type of drum and bass music originating from Latin America, but now popular in some regions of Brazil. Sambass is unique music conjured from a combination of bass and drumbeats and rhythms.

Brazil Music - the Heart and Soul of Brazil

Listening to the different music styles, you can hear and imagine the struggles of the Brazilian people through the settling of their country, slavery, military regime, and their colorful history of simply who they are as a people. Music is the heart and soul of Brazil as a country and it's an important element in the lifestyle and culture of every Brazilian.

Families center their celebrations on music. Carnivals and festivals are huge events in Brazil and music is always a big part of those celebrations.

Music is always played during religious rituals and services throughout the country. Brazil is recognized as having one of the most diverse and unique styles of music within a country.

Click below to see Brazil music contributions from other visitors to this page...

french by birth, living in guadalara mexico, worked for many years in mexico city as airline executive for Real Aerovias and Varig and travelled extensively …