The Top 10 Cities of Brazil

Cities in Brazil are home to nearly 75% of Brazil's population. It wasn't long ago, perhaps less than 40 years ago, that most Brazilians called the rural areas of Brazil home.

The shift to urban life from rural life has presented several social challenges for the country of Brazil in both the larger and the smaller cities.

The influx of people coming into the cities from the rural areas of Brazil has caused the favelas, or slums, to grow at a rapid rate along with crime and poverty. The cities did not have the housing or jobs to absorb all of the people migrating into the city.

City governments in Brazil have attempted to deal with the favela communities in several ways, including the demolition of the favelas during the 1970s. When this didn't work, the governments finally began to recognize these people as part of the larger community and now provide services for them. Services might include sewage, electricity, and paved roads. Schools and health clinics have also been established.

There are increased numbers of homes in the cities, but still the poorer people do not have the means to purchase them, so it's very difficult for those coming into the city from the country to find a decent home.

This vibrant city is known for music, theatre, museums, car racing, sports, and incredibly varied ethnic cuisine. It's also home to 20+ landmarks important to the history of Brazil. Sao Paulo is Brazil's premiere business center. Nearly every industry of Brazil is represented in Sao Paulo, one of the busiest cities in Brazil.

Rio is perhaps best known for its amazing beaches, such as Copacabana, Leblon, and Ipanema, but Rio has so much more to offer. This city is also famous for stunningly beautiful scenery and carnivals. 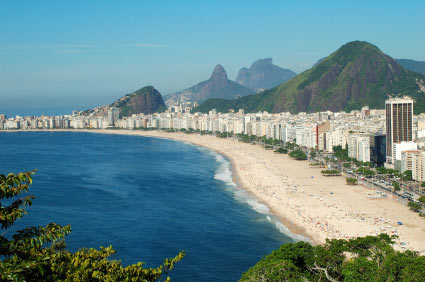 Salvador has been dubbed Brazil's capital of happiness. This city is a mix of rich historical heritage and modern life.

This is one of the most unique cities in Brazil as it is actually not really a city at all! Brasilia is an administrative district of the Federal District of Brazil.

Brasilia is one of the few planned communities that exist in the world. It was built in just four years and appears from the sky in the shape of an airplane!

All branches of the Brazilian government are located here, as well as many major companies and industries.

What are your favorite cities in Brazil? We have created a special area where you can share and even upload some photos!

Cities in Brazil Other Visitors Have Shared

Click below to see Brazil language contributions from other visitors to this page...

Rio de Janeiro IS MY DREAM TO SEE THIS CITY

It was a joy to be in the open market in Embu. To walk the beautiful streets, lined with quaint shops and kiosks. The goods were well made and the people …

Hello! I'm Brazilian, and I was reading your website, I just wanna say I really love it! Most of North Americans don't know anything about Brazil and …

My impressions of five Brazilian cities

I lived in Brazil in the late 1960s. At that time, in my early 20s, I traveled by bus to visit Recife, Maceio, Aracajú, Salvador, Belo Horizonte, Ouro …