The Fun of Soccer in Brazil

Brazil soccer games will get your blood pumping and have you sitting on the edge of your seat to see what will happen next!

Soccer is the favorite sport in Brazil and it's no wonder when you consider that Team Brazil has captured 5 World Cup Championships - an honor that no other team can match. The Brazil national football team was awarded the Jules Rimet Trophy for keeps once they won their 3rd World Cup. No other team has had this honor.

Watching the Brazil team play soccer is not like watching your local backyard soccer game. It is said in Brazil that as soon as a little one can walk, they are taught the game of soccer. There are over 10,000 Brazilians who play professional football, soccer, around the world. 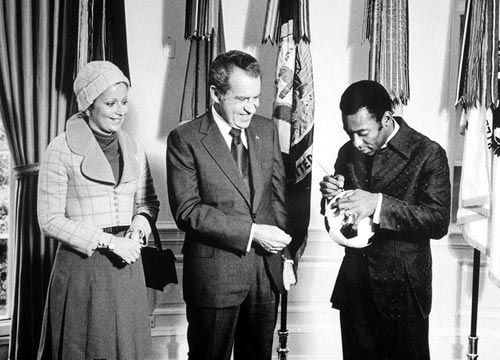 Brazilians are so proud of their national soccer team that they often refer to their own country as the country of football or o pais do futebol.

The people of Brazil are a wonderful mix of ethnic backgrounds and the diversity of the country's people is seen in the sport of soccer as well. The fancy footwork and athletic ability of the players can be attributed to capoeira, samba, and the unique style of dance that has worked it's way from the lower income areas of Brazil into the wildly popular game of soccer.

The reason people across the world enjoy watching the Brazil soccer team play is that it's obvious they put their heart into the game. They're not only athletic and talented, they love playing soccer and it shows! The fans of the team also put their heart and soul into cheering for the Brazil team. The big cities and small villages alike look forward to watching their team play and it's as if time stops in Brazil during the games.

Nicknames of the Brazil Soccer Team

Brazilians refer to their team with pride using many different nicknames. A few include:

Some of the most talented soccer players in the world have come from the Brazil soccer team. Players from Brazil's team who are known around the world include Pele, Ronaldihno, Zico, Tostao, Dunga, Rivaldo, Garincha, Taffarel, Ronaldo, Socrates, Romario, Cafu, and Bebeto to name a few.

Colors of the Brazil Soccer Team

Since 1954, the Brazil national soccer team has worn a yellow jersey with green trim around the collar and sleeves with blue shorts to proudly represent the four colors in the Brazilian flag.

What is the Difference Between Soccer and Football?

There are many similarities between the games of soccer and football, but they are very different games in many ways as well. All sports that involve the use of the foot and a ball to score in the game are referred to as a game of football.

The game of football in the United States brings to mind an elliptical shaped ball and players in helmets playing to score touchdowns. The country of Brazil says football when they refer to the game that uses a spherical ball used to score goals.

Football can be a generic term or it can be used to refer to a specific sport in a country.

Similarities between soccer and football:

Differences between soccer and football:

Soccer is a Brazilian Pastime

Soccer isn't played just by the pros in Brazil. Young boys, by age 3, have learned how to dribble a soccer ball. Boys age 7 and up play soccer games daily on any open space available. You could probably find an impromptu game happening just about anywhere in the city during a given day in Brazil.

The majority of the people living in Brazil are in deep poverty. Soccer is the one ticket out of that lifestyle if the talent is learned early enough. Many of the popular soccer players on the Brazil soccer team came from very poor backgrounds, learning soccer at a very young age.