Manaus Brazil is a bustling commercial city located in the Amazon rainforest. It's the capital city of the Amazonas state of Brazil. Located next to two rivers, the Solimoes and the Negro, and only a short distance from the ocean, it's a busy port with ships exporting several products manufactured in the local area.

Manaus, also known as City of the Forest and Heart of the Amazon, was established in 1669. The official name was changed several times through the years, but it hasn't changed since 1856.

It ranks 12th in size of all the cities of Brazil, but ranks as the 2nd largest city in the Northern regions of Brazil. The nearly 2 million residents of Manau are within the city area of about 4 miles total. 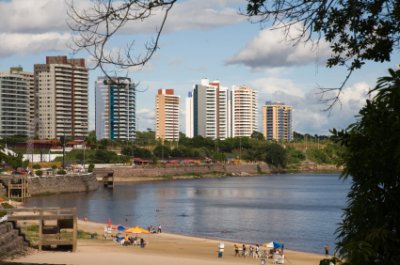 Many people may not even realize Manaus exists and that could be because of its isolated location in relation to the rest of Brazil. The best way to get there is to fly or to go by boat given that you cannot reach it by road for several months of the year due to the rainy season.

The People of Manaus

Friendly, fun-loving, warm-spirited indigenous people make up much of the population of Manaus Brazil. They work hard to produce beautiful products to market to visitors to their city.

You can purchase everything from jewelry to baskets to local herbal medicines from the people of Manaus knowing that it was made right there by local artisans.

Manaus is no different than the rest of the country of Brazil in that they love their soccer or futebol teams! Just in the city of Manaus, they have two large soccer stadiums and eight pro teams.

Unfortunately, flooding is a way of life for these people because they live on the river, but at the same time, the river also provides the means to make a living.

The people are very aware that the Amazon forest is slowly being destroyed by deforestation practices and businesses coming into the rainforest. They're grieved by these developments and yet feel helpless to stop it.

The Amazon rainforest is a lush, green beautiful place, but you see very little green in Manaus unless you visit one of the four large parks that have been carved out between the buildings and roads of the city.

Manaus Brazil is home of several social and cultural celebrations throughout the year.

Beginning in February, there is the Amazonas Carnival where samba students put on a parade in the Convention Center.

May boasts two festivals - the Amazonas Opera Festival and the Music Festival in Ponta Negra.

The Elevation of Amazonas is celebrated in September, the Anniversary of Manaus or Boi Manaus in October, the Amazonas Film Festival in November, and finally on December 31st, a huge New Year's Eve Party on Ponta Negra Beach.

The climate is categorized as a tropical rainforest, which means there is a lot of rain for at least half of the year. It's extremely humid, so you should dress accordingly if you plan to visit. Manaus' winter season occurs from June to August, but even then the weather is warm. Average temperatures are between 86 degrees and 97 degrees Fahrenheit year round.

The majority of the people in Manaus practice Catholicism, but the remaining population of residents practice several different religions.

You can find, in addition to Catholicism, Manauenses who subscribe to religions such as Methodist, Islam, Judaism, Presbyterian, Pentecostal, Baptist, Jeohvah's Witnesses, Candomble, The Church of Jesus Christ of Latter-Day Saints, Mormonism, and Assemblies of God.

Much of the land within Manaus, primarily in the area of Igarapes, is illegally occupied because government never really had strict land use and habitation rules on the books. As a result, there are large populations of people living in sub-standard poverty conditions.

Shacks are built over the water, which means they are at risk due to flooding and to waterborne diseases. An estimated 7,000 families reside in these shack communities.

So many people in one area equates to poor or lack of proper sanitation, raw sewage thrown into the water and surrounding land, no fresh running water, no electricity, higher rates of illness, and a lot of crime. Garbage is also tossed wherever it can go since there is no structured garbage collection system.

The only way to deal with these issues is to implement a plan to re-urbanize the entire city of Manaus Brazil. There was a project proposed in 2005, but I'm unable to find additional information as to whether or not it moved forward.