People in the Amazon Rainforests

The tribes and people in the Amazon rainforests are unique and precious, each with its own culture, beliefs, and way of life. We can learn a great deal from these people who have made the forest their home and flourished there for generations.

There are at least 100 uncontacted tribes or groups of people who inhabit the rainforest. There is little information on most of them, but there are a few who have had limited contact with the world outside the rainforest, and therefore more information has been gathered about them.

All of the people living in the rainforest are endangered by several things:

The businesses who are seeking economic expansion for Brazil may not be aware of the treasures they are destroying by taking a short term view of their actions. Once the rainforest and her people are destroyed, there is little that can be done to bring them back the way they were.

Climate change, or global warming, is a danger to the delicate and intricate ecosystem that is the rainforest. When the climate changes or is altered, animals and plants alike are affected.

When cloud cover, temperatures, and rainfall change, when rivers flood, when there are long and severe droughts as we have seen in the Amazon, these in turn affect how plants grow, how animals breed and survive, and these in turn affect the people who are living there. 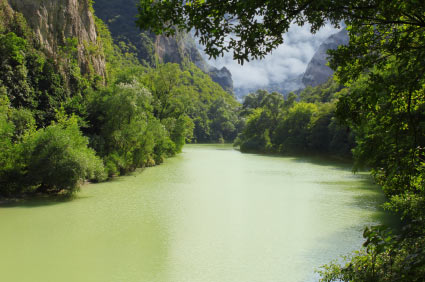 In our crowded cities, transportation may be unpleasant and noisy if you ride in a car, airplane or bus, however in the Amazon, a lot of transportation happens by canoe.

Although canoes can be dangerous and tip over (into pirahna infested waters ...yikes!!), canoes are also an incredibly soothing and peaceful way to travel. It is a great blessing to have the might Amazon river available to travel upon, however severe droughts have caused whole communities to become stranded, hungry and thirsty.

Because each living thing on the Earth is connected with all others, major changes in climate have a severe effect on the ecosystem as a whole, and they impact the people of the Amazon rainforest who live there.

The indigenous people of the rainforest have an innate understanding of how to live in harmony with nature. This knowledge is a key element for keeping the rainforest healthy and intact!

Here are some of the different tribes in the Amazon rainforest that we know about right now.

People in the Amazon Rainforests - Huaorani or
Waodani People

The Waodani tribes consist of nearly 4,000 people who still speak their native Huaorani language. It's a completely unique language in that it cannot be connected linguistically to any other language on the planet.

They see the forest as an intrinsic part of who they are both physically and spiritually and view it as their protector from outside influences and other tribes who may want to take over their land.

Waodani hunters use a weapon that is about 3 to 4 meters in length to hunt for food. It's called a blowgun. It's equipped with arrows with poisonous tips. Traditionally, this was the only weapon used to hunt with, but some Waodani use rifles to hunt nowadays.

What meat do they eat? Skunk pigs or peccaries, birds, and monkeys. They never eat jaguars or snakes because they believe these animals hold special spiritual significance for them.

The Waodani people have a significant interest in the trees and plants around them in the rainforest. They've acquired first-hand knowledge over the years regarding the making of medicines, poisons, and even entheogens, (plants that are known to open spiritual awareness) using the plantlife in the rainforest.

Waodani marry within their family - that is to say, they practice endogamy. Women are permitted to marry a cousin from either side of the family. Waodani men often have more than one wife and sometimes multiple wives.

People in the Amazon Rainforests - The Tagaeri

Another group of people in the Amazon rainforests are the Tagaeri. Tagaeri are actually a smaller clan of the Huaorani tribe, numbering perhaps only 20 to 30 people in all. The Tagaeri tend to move around, staying in no one particular location for long. This small group of people separated from the main Huaorani tribe in 1968 due to conflict within the tribe.

The Tagaeri are a very private group and are one of the people in the Amazon rainforests who have yet to be contacted. It's believed they prefer it to stay that way.

A colonial settlement found this out the hard way when they tried to make contact with the Tagaeri. The tribe attacked them several times, making it very clear they wanted to be left alone. The Tagaeri killed two missionaries in 1987.

Given the fact that this tribe chooses to stay isolated, it is assumed they live entirely off the land, moving from place to place when the food in that area runs out.

The Waura People of the Amazon Rainforests

This tribe of the Amazon rainforest resides on Piyulaga Lake, which is in Brazil. The majority of this tribe lives in this location, about 270 of them, while the rest of the tribe is scattered throughout other areas of the rainforest.

Along the river, three or four families live together in one mammoth-sized hut constructed from wood and leaves from the rainforest.

How do they make their living? Waura people are experienced craftsmen. Their pottery, baskets, colorful bead waistbands, and woven textiles are recognized as quality products and are sold regularly to the Westerners residing in Brazil.

The Waura have learned how to plant simple gardens to grow vegetables. They harvest fruit from the rainforest and hunt game with weapons called blowpipes.

The Awa are one of nearly 67 isolated tribes of people of the Amazon rainforest living under the protection of demarcated lands given to them by the Brazilian government.

They're a small group of people, perhaps 300 people in all. A small percentage of them, roughly 50 to 60 of them, still live the traditional way the original Awa lived - isolated and living off the rainforest.

The Awá are hunters and gatherers and will sometimes move from place to place within the rainforest as their ancestors did many years ago.

People in the Amazon Rainforests - Amerindians

The Amerindians are the native people to the rainforests within the Amazon. Most of them have allowed the Western culture to affect the manner in which they dress and they do utilize the modern Western tools to a point as well.

Many of them have also figured out that by selling their handicrafts to tourists visiting the area, they can help support themselves in a world that is less like the deep rainforest and more like the modern world.

Amerindians still fish and hunt, but they also grow vegetable gardens. A few will clear a significant area of land and plant crops like bananas or rice to supplement their diet as well.

The people in the Amazon rainforests range from the semi-modern to the isolated and traditional. Each group has its own reasons for embracing the Western culture or for shunning it altogether.

It is my hope that as more people understand the enormous gifts that are present in the Amazon rainforest that more protection and respect will be provided for the indigenous people of the rainforest, and for the precious rainforest that sustains them.